The Leicestershire Minerals Plan, drawn up in 1996 by Leicestershire County Council calculated the minerals and aggregates requirement of the county of Leicestershire for the period to 2006. Husbands Bosworth quarry, at the time controlled by Redland Aggregates Limited was one of the sites identified locally as having the capacity to meet part of the requirement for minerals in south Leicestershire.

An extension to the existing workings was surveyed to the south-west of the operating site, at Wheler Lodge Farm, about a mile south of Husbands Bosworth village on the A5199 Welford Road. [SP 640 824]

As a condition of the planning application an archaeological survey of the proposed site was commissioned by the extraction company. Simple field walking surveys conducted by the Department of Archaeology, Leicester University showed an unusually high concentration of worked flint tools, and a more detailed survey was commissioned. A flint knapping area where flint tools were prepared was discovered to the north-west of the site. Later geophysical and magnetometer surveys identified the position of a Neolithic causewayed encampment, which was completely invisible from ground and aerial surveys.

Exploratory trenches across the earthworks confirmed the findings of the surveys and from materials found, the team have been able to date the encampment to the New Stone Age, approximately 3500 BC. At this time our nomadic ancestors, previously hunters and gatherers, were busy in the area establishing a more settled way of life, and primitive agriculture was being developed. Farming had come to Husbands Bosworth! The encampment consists of a large oval enclosure of approximately 175 metres diameter bounded by two parallel interrupted ditches, encompassing about 2 hectares. The specific purpose of the enclosure is not evident, as no signs of dwellings have so far been discovered inside the perimeter ditches. The numerous interruptions in the earthworks would suggest that the encampment was not built for defensive purposes or as a livestock holding.

Excavations suggest that the site held some prominence over a period of two thousand years during which the ditches show signs of regular maintenance. The most likely explanation so far is that the site held tribal significance as a meeting place, a market place, or as a religious centre. Flint tool fragments, a flint arrowhead and shards of Neolithic pottery with clearly defined fingernail decoration have all been discovered at the site.

The site is now under the protection of English Heritage, and has been designated a site of national importance and a Scheduled Ancient Monument. Lafarge Aggregates, who now control the site has undertaken to leave a 15 metre protective margin around the site, and to retain all adjacent hedgerows intact.

Recently, more modern remains, thought to be the remains of burial mounds from the Bronze Age* and dating from approximately 600 BC have been discovered. Work on the site, charting and documenting all the finds is expected to continue until at least 2002.

Link to the University of Leicester Archaeological Services page on the excavations. 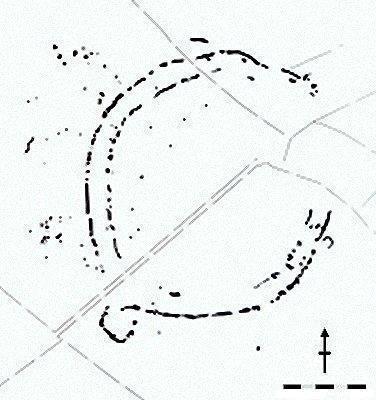 Historical Society members were recently given an update by Matthew Beamish, of the Leicester University Archaeology Department, of the work being carried out at the site of the Neolithic causewayed enclosure at Wheler Lodge Farm. Flint tools found during a routine field walking examination, prior to the excavation of the site for gravel extraction by Lafarge in 1996, indicated a site worthy of further investigation. The extent of finds so far unearthed indicates that the site was of strategic importance for over three thousand years. Remains of ring enclosures and an Iron Age roundhouse, overlay the original causewayed enclosure. Burial chambers, storage pits and hearths have also been found recently by the team. Of special interest was the rare discovery of a burial pit containing a human skeleton preserved by the alkaline soil. Stone corn-grinding querns, smoothed by use, have been found on the site along with charred remains of cereals and nuts. The importance of the site has led to the area around the causewayed enclosure being designated as an ancient monument by English Heritage and an exclusion zone has been created to preserve the site in perpetuity.

Work under the direction of the University of Leicester Archaeological Studies department continues within the environs of the causewayed enclosure. To the south and west of the monument further evidence of prehistoric activities has been recorded. Eight metres northeast from the apparent blocked entrance to the pen-annular ditch excavated in 2001, a substantial pit feature was discovered. This complicated deposit was the result of several phases of cutting and enlargement with a later lining of boulder stones. The deposit as a whole was measured as 3m long and 1.5m wide. The stone lining may have continued upwards to form a burial mound or cairn. Although thought to relate to human burial no human remains were traced. Other features recorded include a small pit containing shards of a probable Durrington Walls grooved-ware vessel. Several Iron Age pits, probably for storage and a number of tree throws, probably dating from the woodland that proliferated in the area, were recorded.

This report taken from Transactions of Leicestershire Archaeological and Historical Society Vol. 77 2003, p.38 by Matthew Beamish

Recent work at the site has revealed a solitary sunken-featured building and associated Anglo-Saxon pottery of 5th and 6th century date 120m south of the enclosure. The archaeological evidence was focussed in one area suggesting little settlement spread. A fired feature, currently undated but possibly a corn-drying kiln of Late Iron Age or Romano-British date was recorded 250m west of the causewayed enclosure site.

Following the discovery of prehistoric artefacts during field walking a watching brief was undertaken by ULAS for F J Garner & Sons during groundworks at the site [for a new agricultural building] which is in the vicinity [ approx. 300m NNE] of the Neolithic enclosure. A possible prehistoric pit was found, [whilst] stripping for the access road... thought to be the remains of a hearth. Unstratified flint implements were also recovered.

A continuing watching brief is established. Excavation and soil stripping of areas close to the Sheduled Ancient Monument (SAM) for on-going minerals supply to Lafarge Aggregates Ltd. during early 2009 revealed the possible sites of two burials. Due to the acidity of the soils no remains were evident. Quarry operations have maintained an acceptable 'stand-off' from the SAM and backfilling with overburden continues to ensure the stability of the feature.

UPDATE: (June 2011)
A fieldwalking project was carried out by Lutterworth Field Working Group, under the direction of Brian Burningham, in a field 200m to the east of the Neolithic Enclosure site. The work brought to light a significant scatter of knapped flint flakes. A primary flake scraper and a finely worked scraper were found along with a particularly fine leaf-shaped arrowhead and what may be a chisel-ended arrowhead. Further work in the area is planned for autumn 2011 when the crop has been removed.

UPDATE: (Dec 2011)
Further fieldwalking at Wheler Lodge Farm in autumn 2011 confirmed earlier findings, with a concentration of worked flint cores near the northern extent of the culitvated field. Further investigation in the adjacent field, when this is cultivated, may reveal the extent of the scatter.

Fieldwalking at Cote Hill Farm, 250m north-east of the Neolithic Enclosure site, during November 2011 has revealed an intense scatter of worked flint, including a number of tools and scrapers and a leaf-shaped arrowhead.

A cluster of at least five defined enclosures forming a possible complex field system was identified by crop marks in aerial surveys undertaken in the 1980s. The features are centred on NGR SP 635 829, near Cote Hill Farm, approx. 2km south of Husbands Bosworth village.

Right everyone, pens down. Bugle QUIZ answer are now available.Click here for relief..