Sheepdog trials were first recorded at Husbands Bosworth in 1905 in conjunction with various other sporting events in a village gala day, and continued until 1908.

These trials attracted competitors from as far afield as the north of England, and Wales. A local class for farmers and shepherds within the radius of the Fernie & Pytchley Hunts was held following the Open Class.

The Gala at Husbands Bosworth was discontinued after 1908, and with it the sheepdog trials. Local auctioneer and valuer, Alec McTuck of Blaston was particularly interested in the sheepdog trials and decided to organise a trial at Blaston. The Blaston trials were first recorded around 1929 and continued each year until 1932 when it was decided to discontinue the trials there.

In 1935, Alec McTurk approached a number of farmers from Husbands Bosworth and Theddingworth, particularly those farmers who had settled in the district from Wales, with a view to holding sheep dog trials in Husbands Bosworth Hall Park. A small committee was formed with Percy Burton as secretary, and they decided to run a sheepdog trial in conjunction with the British Legion Flower Show and other sporting events on 1st August 1936, with competitors travelling from the north of England and Wales.

Due to the distraction of the sporting events, it was decided in 1938 to break away from the British Legion and run the sheep dog trial on its own. A donation would be made to the British Legion funds from any profit made on the day. After the death of Alec McTurk, his sister Miss May McTurk, who also took a great interest in the trials, in 1939 presented the Society with three cups in memory of her brother. These were to be competed for each year - one cup for each of the Classes; Local, Open and Doubles. Due to the outbreak of the 1939 - 45 war, the trials were discontinued and in January 1946 a new committee was formed with a gymkhana and pony race added to the programme.

The continuation of the sheep dog trials after the war, attracted competitors from further afield. Many from Scotland, Wales and many parts of England were attracted to these excellent trials, and they continue today to be as popular as ever. 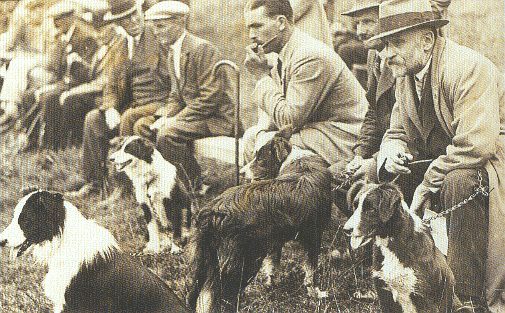 Sheepdog trialling as we know it today is a result of one of man's many vices - gambling. Dogs of various types and abilities have been used for many centuries for all kinds of tasks, including controlling of domestic livestock. Sometime in or around the 1870's a couple of shepherds took on bets as to which of them had the best sheepdog. This resulted in a contest held at Bala, north Wales, which was extended to include several other competitors.
The first trial was a very simple affair, the dogs being required to fetch a small packet of sheep. Since that crude beginning the sheepdog trial we know today has been evolved to demonstrate all aspects of the everyday work of a shepherd and a dog. As you can probably appreciate none of the tasks necessary to maintain good health in a flock of sheep (worm dosing, annual vaccinations, etc.) can be achieved whilst the little woolly brutes are running wild in the fields or on the open hills. The dog's main task then is to gather them to the shepherd. This task is duplicated by the first three elements of the trial - the Outrun, the Lift and the Fetch . 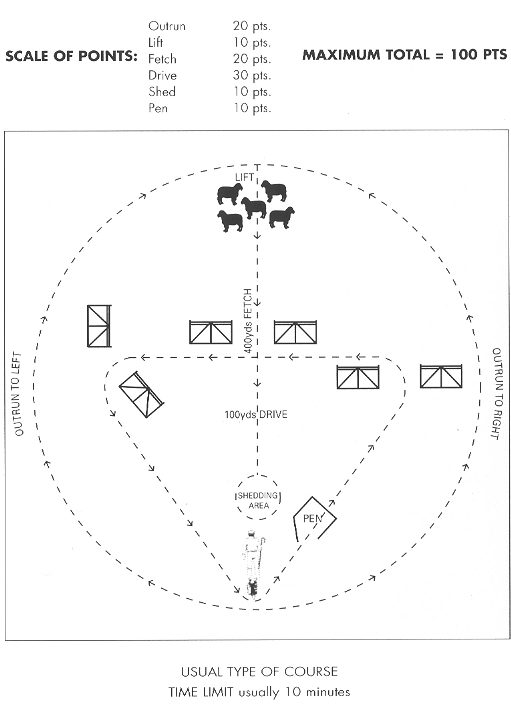 Once gathered they then need to be driven to a suitable handling area. The shepherd being a generally crafty sort, may be able to take a short cut not always negotiable by a flock of sheep so the dog may be required to reach the same objective by a more circuitous route This is again duplicated at trials by the Drive, usually triangular and approximately 450 yards requiring the negotiation of two obstacles in the form of pairs of hurdles with a gap of seven yards, representative of field gates.
On arriving at the chosen site it may be necessary to separate some members of the flock that are not required immediately. This is achieved by working these individuals to the outside of the flock and cutting them off with the dog. This process is known as Shedding and at a trial usually has to be accomplished within a 40 yard diameter sawdust ring.
The final stage, as far as practical shepherding goes, is to contain the sheep in a suitable pen from where the task of the day may be easily carried out. This pen is usually constructed in a corner of the field to make penning easier. Due, no doubt to the devious nature of the most competitive shepherds the pen at trial is constructed well out in the field allowing the woolly monsters every opportunity to evade a shepherd and dog by nipping past either side - well who said it should be easy?

The overall ruling body of sheepdog trialling is the International Sheepdog Society (ISDS) which runs, annually, the four National Trials of England, Wales, Scotland and Ireland. Trials are run throughout the U.K. all summer. These trials are organised either by individuals or numerous local societies. Any open trial of 25 or more dogs run over a course approved by the ISDS is classed as a National Qualifying Trial and from these are drawn the 150 dogs to run at the four National Trials. The top fifteen from each of the four national trials then go forward to compete at the International Trial which itself culminates with the Supreme International Championship Trial held every September and run over an enormous and difficult course. The winner of this diabolical test can expect everlasting reverence throughout the sheepdog world and exorbitant stud fees - the dog that is, not the shepherd! In the event of a bitch winning any subsequent pups become gold plated.

The enduring appeal of trialling to its devotees, however is not confined purely to competition, though believe me anyone walking out to that lonely post with his dog is deadly serious. There is also the aspect of having a great deal of fun with like-minded people. This is usually expressed in non-stop banter and mickey-taking of the worst order. If you cannot laugh at your own mistakes and misfortunes on the field, whether of your own making, your dogs contribution, or the little woolly varmits that have just run rings around you, then be assured everyone else will. If you cannot stick it you will not be a dog trialler for long. Ribaldry Rules O.K!

1st Prize £250 and the T.B. Barlow Challenge Cup [Won 3 times in succession or five times in all, becomes the property of the competitor ]

Highest Pointed novice: £15 and the LLYR Evans Perpetual Novice Trophy [Won 3 times, not necessarily in succession, becomes the property of the competitor]
NB. A Novice is a dog or bitch which has not won 1st or 2nd in an Open Class, or 1st in an Open Novice Class before the day of the Trials.

SPECIAL AWARD: The Miss May McTurk Memorial Cup (Perpetual) to be awarded to the highest pointed run in the Open Class by a handler of the opposite sex to that of the winner.

L.S.D.S. YOUNG HANDLER AWARD: £10 Cash Prize and the Rosette from the Westerby Challenge Cup. [Handler must be 25 yrs old or younger] Competitors under 22 years on the day of the trials would qualify for the draw to represent England as a Young Handler at the International

Right everyone, pens down. Bugle QUIZ answer are now available.Click here for relief..